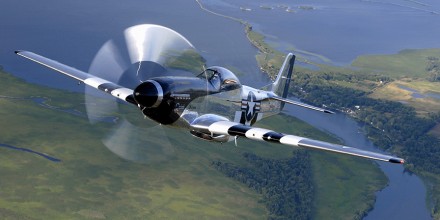 The P-51D Quick Silver, also known as “The Resurrected Veteran”, celebrates our nation’s armed forces. Thoughtfully designed, each aspect of the paint feature represents and honors those who have served our country and who have made the ultimate sacrifice. Father and son team, Bill and Scott “Scooter” Yoak of West Virginia, spent 13 years meticulously working to make the P-51D Mustang a reality. The Quick Silver Mustang is made from parts of Mustangs that were used in every war theater the Mustang was utilized.