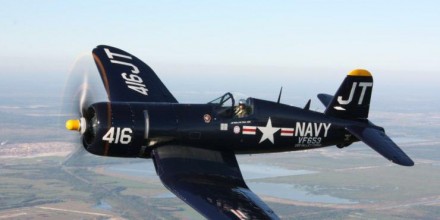 The F4U Corsair was the most capable carrier-based bomber-fighter of World War II. Flown today by Jim Tobul of South Carolina; this aircraft has seen the tests of time. Since discovering the 1945 Corsair in a lime orchard in Homestead, Florida; Jim and his father Joe Tobul bought this airplane in 1981. After a very long rebuilding project, ten years later “Korean War Hero” proudly flew again on December 8, 1991 over the Pittsburgh skies.

“Having piloted for nearly 400 flight hours, I put it through all the air show tests again, including some of the most dramatic rolls, loops and dives,” says Joe Tobul, “the crowd’s applause and shouts have made all the long wait and expense worth it!”